Elaine Benes – “Were you just talking about me?” 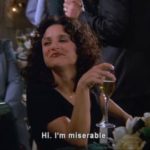