Jerry Seinfeld – “Sorry, I am not familiar with that term” 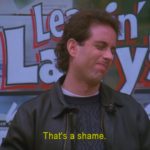