Elaine Benes – “Thank you for clarifying your utter trainwreck of a thought process.” 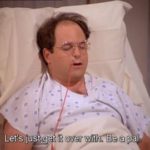