Elaine Benes – “These disgusting animals. These people should be in a cage.” 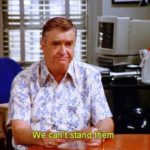