Jerry suggests to Kramer, “why don’t you go out? It’s nice out.”

Kramer responds, “Oh, no. There’s nothing out there for me.” 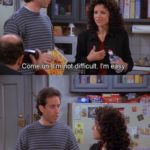