Elaine looks at Jerry and says, “Come on. I’m not difficult. I’m easy.”

Jerry glances back and says, “Because you dress casual and sleep with a lot of guys?” 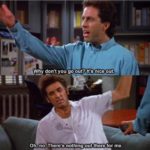 No posts match the widget criteria

Please check if there are posts that match all the below criteria. If not, remove the wrong ones in the widget settings.