George Costanza to Jerry Seinfeld – “Everybody’s doing something. We’ll do nothing.”

JERRY: What do we got?

GEORGE: An idea for the show.

JERRY: I still don’t know what the idea is.

GEORGE: It’s about nothing.

GEORGE: Everybody’s doing something, we’ll do nothing.

JERRY: So, we go into NBC, we tell them we’ve got an idea for a show about nothing.

GEORGE: There you go.

JERRY: (Nodding) I think you may have something there.

JERRY: So, the show would be about my real life. And one of the characters would be based on you.

JERRY: What do you mean you don’t think so? 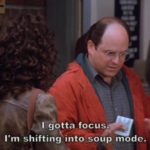